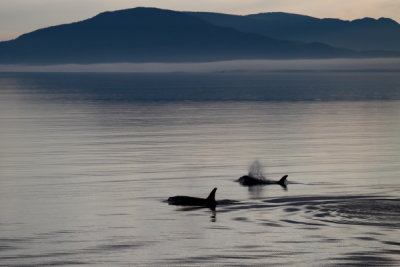 Orcas in the morning, Alaska.
Orcinus orca, the “Killer Whale”, seen here in the Inside Passage in Alaska. Our friend the Orca is a toothed whale belonging to the oceanic dolphin family, and is another apex predator. The conservation status of the Orca is not defined, in part as we aren’t even clear if there are one or two species. The Southern Resident population of British Columbia and Washington State waters however has been listed on the US Endangered Species list. However Orcas are hunted by indigenous tribes, usually as an alternative to their more usual targets. The change is brought about by reduction in whale numbers and this is usually the result of over hunting od whales on a commercial level. In 1946 the International Convention for Whaling was signed (https://iwc.int/convention) and its schedule sets out catch limits for commercial and aboriginal subsistence whaling. These are set out in the schedule, many of the catch limits are now set to ‘0’ and indeed commercial whaling is banned for many species and in certain areas in entirety. There are two notable objectors to parts of the IWC, these being Japan and Russia, with less important issues in Iceland and Norway. Russia currently allows aboriginal hunting of whales in Chukotka, even so they can take 140 Gray whales a year. It is also noteworthy that Russia greatly under-reported its whaling catch in the years between 1948 and 1973, taking 20 times as many whales as it formally reported……! Norway is the only country to openly take whales on a commercial basis currently, harpooning from the North East Atlantic Minke population.


Iceland began ‘scientific research’ whaling in 1986, exploiting a loophole in the IWC moratorium on commercial whaling. Whilst the Icelandic ‘take’ was relatively small, its great impact was to give precedence to the Japanese who then started their own ‘scientific’ whaling in 1987, which they continued up to last year. The International Court of Justice (ICJ) disagreed, ruling on March 31st 2014 that the Japanese government must halt the program because of its limited scientific output. In response, Japanese officials announced on April 3rd 2014 that they had abided by the decision and cancelled the upcoming Antarctic hunt for the first time in 25 years. Whilst this is great news, the story is not yet over as at the 65th meeting of the IWC in 2014, Japan submitted a proposal to permit small-type coastal whaling of minke whales from the Okhotsk Sea-West Pacific stock. This proposal was not adopted by the Commission, and Japan indicated that views of individual member governments on this proposal would be explored intersessionally. In January 2015 Japan circulated a consultatory document with replies due by end of April 2015.


Why is this important, what is special about whales? Apart from being the largest mammals on the planet I believe they are a ‘great’ example of the impact of ignorance and culture on our world. These are inquisitive and sociable animals, I have seen Minke whales in the Antarctic come up alongside zodiacs, spy-hop, where they bring themselves vertical, to lift their heads and eyes out of the water and look into the Zodiac. Indeed that particular day they stayed so long alongside the zodiac that my wife was in that she could reach out to touch one as it looked at her. Remarkably the whales that day really seemed to enjoy the interaction with excited tourists!
I have also walked on a shoreline in Svalbard where there used to be a whaling station on the land. You walk past pile after pile of bones, each pile is not the bones of an individual whale, as you might guess, but the skulls of hundreds. Whaling in Svalbard really only finished when the whales ran out. To me that was an example of ignorance, 17th and 18th century whaling, in lands that were poorly understood and poorly documented with little science. The Japanese ‘scientific’ whaling had little science, (but the meat did end up in restaurants in Japan and West Coast USA!) the Japanese culture though clearly was the big driver for their 600 or more whales a year harvest. To be close to a big whale is an inspiring moment, watching orcas jump as they fish early in the morning is beautiful. Whale watch, don’t hunt, because as they discovered in Svalbard, when they are gone, they are REALLY gone!
Next Image
Previous Image