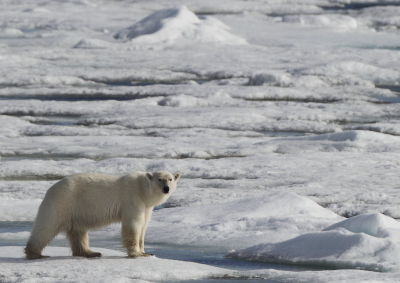 Adult male on the ice.
Ursus Maritimus, the Polar Bear, or nicely named the Ice Bear in Svalbard (Isbjorn) sits as vulnerable on the IUCN red list. Previously hunted severely, the populations recovered when hunting was generally banned. BUT, global warming is a clear and present danger as they are highly dependent on the pack ice for hunting seals, their prime prey. Whilst they will eat other prey, to achieve adequate calorie input is difficult and in the absence of ice and consequently seals, they will generally struggle and often die of starvation.

Polar bears are apex predators and really fear little other than other polar bears. Males will kill cubs to bring females into oestrus, a female with cubs will be very wary of passing males and move out of their way as much as possible. They are excellent swimmers and as adults will swim very considerable distances to find food, sadly sometimes their cubs will not survive the duration of swims that adults are can be forced to undertake. As a species, they split off from brown bears anything between 5 million and 150,000 years ago. The wide estimate comes from conflicting evidence from different sources. It is likely that polar and brown bears continued to interbreed, which may be the source of the uncertainty. It is still possible for the offspring of brown and polar bears, grizzly-polar bear hybrids, to be fertile.

Polar bears have a special place in many cultures, and seeing a large mature male on the ice it is not difficult to understand ‘the why’. To a native human culture sharing the same environment the polar bear is generally considered a real threat, yet they are often described in mystical and god-like terms. The first time you see a wild polar bear close up, and hopefully from a safe distance, is memorable. You recognise the power of a mature adult, see that it is softly yellow rather than harshly white in colour. Watch a mother with her young cubs; she watches them play, but watches also for other bears that might threaten her cubs. The attrition rate of cubs is high and relatively few survive to sexual maturity, therefore bear populations will recover slowly from times of stress. There are 19 generally recognised sub-populations, and whilst these tend to stay within home ranges, the evidence is that they interbreed. However of these subpopulations, eight are declining, three are stable, one is increasing, and seven have insufficient data, as of 2009.

It is impossible not to be aware of the threat to polar bears from changes in sea ice, only time will tell how this will pan out. For the moment the future for these beautiful, but dangerous, animals looks uncertain.
Next Image
Previous Image