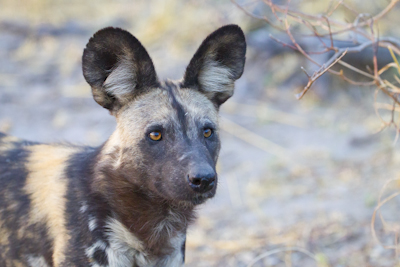 This is my second choice for The Endangered World series. They are only pipped to the post by cheetah because I saw cheetah in the wild first by many years. I had heard of wild dog, obviously, but never seen them or appreciated them before one great morning in South Africa when we were lucky enough to see a pack hunting. Awesomely fast through the bush, we had to give up after an hour or so when we couldn’t follow them any further. It was 4 more trips to Africa (and our second with the primary aim of seeing wild dog) before we were lucky enough to see them again, and this time we were able to spend a good time with one pack.

These are highly efficient predators, with a strong social structure, that have greatly suffered at the hands of humans. Historically that included poisoning as they were looked upon as being cruel hunters as they tend to eat prey quickly without the finesse of, say, a cheetah that would strangle its prey first. But this is a response to their own threats and evolutionary history and says much more about the first settlers and their own hang-ups.

IUCN classifies them on their redlist as endangered, but this is a worsening of their previous ‘vulnerable’ classification, and there is little sign that they are not going to progress through critically endangered to extinct in the wild. Historically they have always existed at low population densities, each pack ranging over enormous distances and occupying therefore very wide geographical areas. Inevitably this both brings them into direct contact with man,(and his domestic dogs with rabies and distemper), but also means that human exploitation of land fragments their natural ranges and reduces the ability for breeding between different groups and the genetic interchange that is needed for a healthy population. Current estimates suggest there are about 39 distinct wild sub-populations with between 2 and 276 mature individuals. Current estimates suggest there are about 6,500 adults in the wild, of which around a third are mature individuals.

Once very widespread across most of sub-Saharan Africa, they probably favour thicker bush, but are seen on plains and even semi-desert. The stronger residual populations now are in areas where humans find it harder to use the habitat. Overall, their preferred target is medium sized antelope but they have a wide taste.

To watch them is a privilege; I’ve enjoyed the huddle of puppies, paws everywhere, under the watch of adults and seen the obedience of these same puppies when the adults go to hunt. The social structure is clear within the pack, but also very co-operative; they have to work together as a pack to survive.

For more I recommend reading http://www.iucnredlist.org/details/summary/12436/0.
Next Image
Previous Image