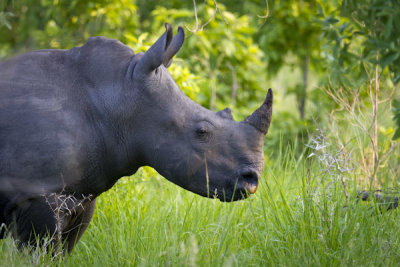 At first glance, the IUCN data that suggests the White Rhino has a status of Near Threatened, but an increasing population looks reassuring. Indeed IUCN estimated at the end of 2007 that there were 17,460 wild-living animals at that time. Then consider two points, firstly that the Northern White Rhino is now all but extinct with only 5 known remaining individuals and secondly that South African officials reported this week (January 2015) that a record 1,215 rhinos were poached in South Africa in 2014, a 21% increase on the previous year. (http://www.bbc.co.uk/news/science-environment-30934383) Let us ‘do the maths’ 17460/1215 = 14.3. At current rates then it is game over for White Rhino by 2030. Of course as the Rhino becomes rarer the poachers will have to try harder, but the value of the horn (Just good old fashioned Keratin, or skin and nail to you and I) will rocket amongst the ignorant who buy it for its ‘magical’ properties, or to turn into the handles of fancy daggers!


The white rhinoceros or square-lipped rhinoceros (Ceratotherium simum) is the largest species of rhinoceros that exists. It is a generally sociable animal that tends to live in herds, either of females and young or of sub-adult males. The mature adult males tend to be solitary. Generally considered the largest land mammal after elephants they have no real natural threats due to their size, willingness to defend their young, and of course the sheer thickness of their hide!


White rhinoceroses are found in grassland and savannah habitat and as a herbivore grazer that eats grass, the white rhinoceros is the largest of the pure grazers. It drinks twice a day if water is available, but if conditions are dry it can live four or five days without water. It spends about half of the day eating, one third resting, and the rest of the day doing ‘other things’! (Wallowing in mud for example.) Widely distributed across southern Africa, the majority are in South Africa itself. Unfortunately for the Rhino, South Africa has a long border with Mozambique, where Rhino poaching is a misdemeanor, only!


Modern poaching involves helicopters and high velocity rifles. Amputating the horns by vets to make them worthless has been tried. Unfortunately the poachers just shoot the animals so they don’t waste time another day in tracking them again. In Kenya animals and horns are being implanted with GPS microchips, together with DNA sampling to allow better prospects for conviction of those caught with Rhino horn. The Rhino Rescue Project now uses a combination of indelible dye in the horn together with an insecticide in the horn that causes nausea and convulsions in humans but is safe for Rhino (and Oxpeckers!). To make the strategy work they need the poachers to know that these Rhino are valueless; they aim to do that through publicity and local word of mouth. (http://www.rhinorescueproject.com/)


What else can we do? Try and spread the word: do nothing and they will be gone. Pester your politicians, retweet the links above, ask your government what they are doing, support your local zoo in its conservancy program, donate to the Rhino projects..... When they are gone, they are really GONE!
Next Image
Previous Image