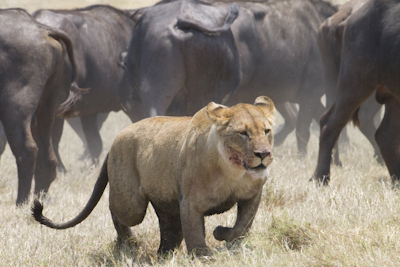 Panthera Leo, The Lion, The Symbol of England, My third choice for the Endangered World series. IUCN redlist ranks the species as vulnerable, with most recent estimates being that there were between as few as 16,500 and as many as 47,000 lions in Africa in the early 2000’s. Outside Africa there is only one small residual population in India’s Gir Forrest. This population of P. leo persica is around 360 individuals in total, and even this small population may be too large for its available territory to sustain.

Historically lions ranged from Northern Africa through to southwest Asia, and within historical times into Europe, becoming extinct about 2000 years ago, and east into India. They are now still found within most countries in sub-saharan Africa. They have a broad range of habitats, avoiding only the central desert and tropical rainforest areas. They are not limited by water supplies, being able to obtain moisture from prey and even plants, but they will drink copiously when water is available. (after all, the drinking lion is a classical image!)

They will take virtually any animal as prey, though the bulk of kills include antelope, zebra and wildebeest. Having said that, prides will specialise in different prey. The animal in the photograph is from Duba Plains, Botswana, where like the Mwamba pride in Zambia, they specialise in buffalo. Like Wild Dog and Cheetah it is the human interaction that threatens this apex predator, as adults they have little per se to fear from other predators, but territorial reduction by human incursion is the major challenge. With the humans comes the introduction of stock animals; understandably lions differentiate little between a stock cow and a wild buffalo with the obvious consequences.

The lion has been a trophy animal throughout history and sadly this continues to the current time; I’m not sure that I buy into the concept of hunting wild lions with the hunting fee going into conservation. I’m even less impressed by the breeding of lions for so called ‘canned hunting’ on private game reserves; perhaps if the trophy hunters used a spear on foot, rather than a rifle, it would be more interesting to the outsider. Unfortunately though I understand the Maasai tribe continue to hunt lions as a rite of passage even now. Perhaps they will learn that there is more value to a live animal than to a skin?

I’ve seen a number of lion kills, but my favourite memory is of being surrounded by over 20 lionesses as they gathered to hunt. Fortunately the open safari vehicle we were in was of no interest to them other than being useful for a bit of a scratch! There was also the day when on foot in the bush we ended up face to face with a young male, perhaps 4 feet apart! Both parties had made a misjudgement; he ran one way and we discreetly retired in the opposite direction......! It made for a good story around the campfire later.
Next Image
Previous Image