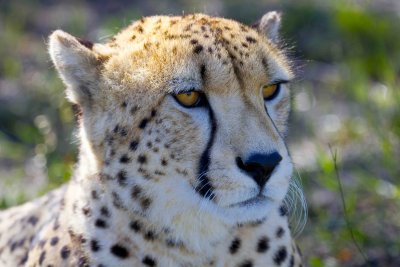 Why Cheetah as the first cat in the Endangered World series?

This is a personal view and the choice starts simply with it being Africa’s most endangered cat, according to The Cheetah Conservation fund, but for me it is more than that. I have been lucky enough to watch the patience of a mother Cheetah as she hunted for her 4 cubs, the drama of the hunt and the circle of life that is the kill. A few days later we saw the moment that particular individual decided it was time for her cubs to make their own way in life and she simply kept on walking away from them after a failed chase. Remarkably I learnt a couple of years later that all 4 had survived and grown to be healthy animals. This is rewarding, because as world expert Laurie Marker says: “Cheetahs once ranged across south Asia, the Middle East and Africa, but by the late 1970s, they were gone from Asia, except for a few in Iran, and were declining rapidly in Africa, where ranchers routinely shot them to keep them away from livestock.”

In 1900 there were about 100,000 worldwide, in the 1970’s there were 30,000, some estimates put the wild population now as low as 10,000 individuals. Worse than this the Cheetah population has become so in-bred after a catastrophic population decline about 12,000 years ago that it is possible to transplant skin from one animal to another without need for any form of immunosuppression. Indeed as the National Institutes of Health showed most cheetahs are virtually clones. The modern Cheetah population appeared about 200,000 years ago, with the earliest fossil evidence showing that the earliest ancestors emerged in North America about 8.5 million years ago before spreading widely through Asia, India, Europe and Africa.

Human impact on cheetah has not been limited to hunting; competition for the same land has lead to cheetahs being forced into smaller enclaves, often being separated from neighboring groups of cheetahs. Inevitably this worsens the inbreeding and this lack of genetic diversity puts them at even greater risk. As for Tigers in Asia there is becoming an understanding of the need for corridors through which animals can travel safely. Understanding of need and delivery of that need are unfortunately not the same.

In Namibia farmers are now encouraged to protect their stock with guard dogs, understanding that cheetahs will not go for adult farm stock. In conservation facilities and zoos we have learnt that breeding occurs when a single female cheetah has her choice of males. One of the downsides of captive breeding though is that cheetahs have to be taught to hunt be their mother, and this has made the release of captive animals back into the wild a challenge.

I love the beauty of the cheetah, its majestic poise at rest, its incredibly graceful movement as it runs at full speed, and if you’ve been lucky enough to get really close to one, they have an incredible joy of just being alive. A beautiful and truly endangered animal.
Next Image
Previous Image